I’d like to think that I’m sitting in a dimly lit room in London’s Soho, sipping Old Fashioneds out of chilled thick whisky glasses, with David Wilson (a music video director par excellence), Noreen Khan (an award winning music video producer from RSA’s Black Dog), Matt Robinson (one part of directing duo Wriggles & Robins), Tash Tan (Somesuch & Co’s music video producer), and the conversation is flowing, occasionally interrupted by bursts of laughter and people raising their voices to argue their case. But the truth is, I’m alone in my bedroom, writing this after work, the one that pays me, and the ‘space’ in which this conversation is taking place is in fact online. My romanticised image is briefly shattered and replaced by the glow of my laptop and its overheating battery which is burning my thigh as I lie in bed. But the old fashioned versus online play, all of a sudden seems very apt considering we are discussing music videos. It could be argued that it is indeed online where music videos live today. More often than not, their circle of life has something to do with a dark bedroom and a laptop.

As a fairly fresh face to the music video industry, Matt Robinson, puts it: “I think it’s really interesting that someone who is relatively unknown, can spend a few months working from their bedroom and still have the credibility to work with international artists.” There is something interesting in the proverbial bedroom. For Americans, it seems to be the garage where great things start. For the Brits, it is the bedroom. Nevertheless, the ‘bedroom philosophy’ I’ve adopted here automatically brings to mind three things; budgets, creative control and the internet. In other words, financial freedom, creative freedom and the freedom of distribution. This is not, by any means, a unique phenomenon, limiting itself only to music videos. Other forms of cultural expression have very much followed similar patterns. Although we’ve so far only talked about bedrooms and the internet, I wouldn’t go so far as to suggest music videos have become like porn, but I would argue there is an element of disposability deeply rooted in them. Now that music videos are being made for the internet and only for the internet, they have become disposable by nature. Even the best ones: growing, circulating and dying on the internet faster than music videos that were created for television circulation. Matt says that you could also argue that the music we’re making the videos for, has become more disposable as well, and I think he’s right.

When it comes to creative control, there are obvious technological developments that have aided the rise, both in volume, and arguably in quality, of the UK music videos of this century. This article isn’t about the cost-friendly 35mm sensor Canon 5D Mark II (which really opened up the shallow depth-of-field-look to the common cameraman), or cracked torrent versions of Adobe Creative Suite or Final Cut (making professional quality post-production possible from ones bedroom). Or even the iPhone and iPad coming along, screaming for short form visual content. It is worth mentioning that these developments have massively affected hundreds and hundreds of music videos we’ve seen in the past ten years. The technology has allowed the music video to evolve at a pace where so many lines have become blurred, that its forefathers would barely recognise it anymore. Product placement, gaming, interactivity, films, various forms of digital executions, live experiences (all together what the advertisers like to call the 360 degrees of marketing), are changing the way we make and view music videos. Bands like Radiohead and Arcade Fire have experimented with both user-generated and interactive videos. Pharrell recently created a 24-hour online video. Bespoke as well as original music has been used in advertising; especially cover versions of older hits, as featured in recent John Lewis and Adidas ads. And brands like Nokia, Volvo, Ikea and Red Bull have recently sponsored full-length music videos. Matt takes another sip of his imaginary whisky and says “There are a lot of shit brand sponsored music videos, but musicians and artists have appeal that brands love to buy”. Times are a-changing and bigger budgets have entered the frame again, bringing with them questions about artistic integrity. With that, let us quickly visit the early days of music videos, before going back to the bedroom to talk about creativity.

The late ‘90s were almost amusingly shit for the UK music video scene. The end of MTV’s dominance, questionable pop music, record labels reacting and over-reacting to Napster and other new threats of the time. It was almost as if the labels were trying to create added value to the music, much in a way the film industry regularly visits 3D and other ‘enhancements’, to make the experience of the music more complete. Videos like Michael and Janet Jackson’s ‘Scream’, the ‘95 Mark Romanek directed video which’s inflation-adjusted production costs allegedly reach over 10 million dollars, could be seen as the golden age of music video-making when it comes to budgets, but in retrospect it is easy to argue that after an era of excess, recession was always looming.

None of our group seem too keen to talk about recession though. A couple of them mutter something about how the scars are still visible, but quickly focus on happier things. Happy bedroom things. I pour some more whisky into the glasses of the online chatterboxes and we start to talk about creativity again. How narrative story lines and performance pieces aren’t necessarily the most interesting videos of our internet age. There are ideas, techniques and tricks that have been created in bedrooms around the country and the world that make you go “Why didn’t I think of that?”. Matt Robinson, together with his directing partner Tom Wrigglesworth, created one of these ideas when they projected images onto people breathing on a cold winter’s day and eventually used it for a Travis music video. These type of videos generally have viral qualities, starting with the OK GO videos, easily reaching hundred’s of millions of people online. I suggest that we should call these ideas that form the core of the music videos ‘visual riffs’. I’m thinking visual ideas that form the spine of the video; a teacher’s bum framed tight and shot from behind going from side to side in David Wilson’s Tame Impala video for example – a visual rhythm, a beat. An idea that comes to mind when you listen to the track over and over again and start visualising it.

For film-makers young and old, whether short form or long form, commercial or artistic, the appeal of these visual riffs is freedom. With music videos, they can get away with more controversy than they ever could with brands or studios or regulatory bodies such as Clearcast or Ofcom having their say. Also, these visual riffs are like little jam sessions, they are extremely satisfying when married with the track, without necessarily having to actually say much. From sweet and feel-good, to raunchy and violent, they can be technique-orientated, or revolve around a single ‘riff’ that is designed to keep the viewer’s interest for a certain amount of time. The idea is to leave behind a visual image that associates with the track in an imaginative way. The riffs can be flirting with conceptual art; like one of my favourite music videos of late, Manu&Fleur’s ‘Pursuit’ video for Gesaffelstein. Or they can be extremely provocative; like Megaforce’s interpretation of ‘modern’ masturbation in their collaboration with Is Tropical. With occasionally non-existing censorship, fuelled by bedroom-creativity, a global audience to woo, and an increasing amount of competition fighting for our attention.

The videos we see introduce a plethora of ideas, techniques and concepts to us. Even though only a few of these visual riffs will stay in our collective psyche as individual videos; in the way that we remember the clunky Dire Strait’s computer generated graphics, the above-mentioned Michael Jackson’s little zombie-dance video number or my personal highlight, Kate Bush playing Donald Sutherland’s son, together they, alongside developments in other areas, have created a new way we consume all audiovisual media. For the eighties-born Generation X, the gap between Neneh Cherry’s post-modern ‘Buffalo Stance’ video and Is Tropical’s ‘This is Greek’ is huge. Videos like Spike Jonze’s ‘The Drop’ for Pharcyde (a simple visual riff that makes you go “I can’t believe no one has done that before”, if I ever saw one) and Michel Gondry’s pieces for The White Stripes (even more so) laid the way for how creative one could be with music videos. And this development has continued in bedrooms around the country.

All of a sudden you didn’t have to splash 10 million dollars to create a black-and-white spaceship where you invite your sister to dance in a Camden-rave get-up, you found yourself enjoying, and possibly making, a stop motion video with Lego. Music videos have always been a platform for established directors to experiment with more freedom. Nowadays music videos are also an excellent platform for new directors to showcase their visual riffs and make a name for themselves quickly. It seems to have instant commercial appeal for a director to have a music video on their showreel, and it is no surprise that all leading UK-based commercial production companies have a music video arm and/or representation built in to their business, even though music videos are rarely, if ever, seen as direct money making exercises for productions. Music videos have become showcases of creativity, which today is seen as immensely valuable.

This rise of the music video hasn’t gone unnoticed within the UK awarding bodies, or in wider cultural appreciation either. In 2014, D&AD has reinstated the music video category and the MVA’s (as opposed to MTV’s VMA’s) are getting bigger and bigger every year, awarding low-budget video-making separately as well.

It remains to be seen where the music video is heading; it is so linked to traditional cultural forms of expression from fashion to cinema, as well as more recent developments in gaming, interactive and the internet, all driven to a certain extent by both technology and advertising, that it is difficult, although intriguing, to see how they will evolve.

As I pour the last drops of my imaginary booze into Matt’s glass, he concludes, “To be honest, fuck knows what’s going to happen. The only certain thing is that the changes are going to speed up exponentially, so those that aren’t willing or nimble enough to adapt, will find themselves disappearing faster than ever.” Together we raise a glass to our disposable heroes. 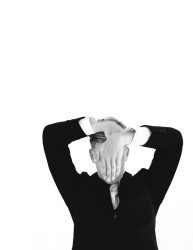